When even dental braces can communicate

“It all started with ‘Skinny Love’, we recorded a video and uploaded it to YouTube. People started sharing it. I’ve been told that more than 11 million of my albums have been sold. It’s awesome. The truth is I don’t know what would’ve happened if there was no such thing as YouTube” [Birdy, singer-songwriter]

I simply love communication. I simply love education. The latter can’t exist without the former. I love noticing little details which go unnoticed. I love details. Much more than the main subject matter itself. I love the gesture of a student when something catches their interest more than the joy of the other who just got an A-grade. I believe in the romanticism of the mundane, of what is there all the time but which no one takes any notice of. I love Birdy, and today I’m going to talk about her. Yes, she’s a singer, and here in Spain people know her due to her taking part in the series ‘Velvet’ with one of her most famous songs: ‘Wings’.

They call her Birdy because when she was a child, when they fed her she opened her mouth like a little bird. Even then, she was communicating through the way she ate. She could have opened her lips in the same greedy way as any other predator does. But no, she reminded her parents of the meekness of a little bird. By the age of 8, she was already composing songs and was communicating to her family that she wanted to create. As well as her music, which communicates a great deal, I like what this girl communicates. I believe that in a world where appearances are everything it is vital to once again place a value on what is authentic, on what is transmitted through gestures or words from the innocent hearts of our youngsters, our future. I remember one day coming across this interview:

After watching, I realised just how many things this girl, who was only 15 years old when she did that interview, was communicating to me. And this wasn’t only with her replies, which came out impulsively and with total sincerity, but also with her body language and non-verbal communication. Let’s not forget that this too exists and can be decisive. And let there be no confusion between them. Body language refers only to what we put across with our gestures and the positions of our body, while non-verbal communication is that which the person communicates with their image in general and those are the stimuli which are put out by the most sincere part of you. I am surprised by the coherence between her actions, what she says and her emotions. Then, she was only 15. Now, take a look at what she communicates in this other interview from earlier this year, at the age of 21.:

The sincere smile. The complicity with the interviewer. When they ask her: “Do you think you have missed out on the things of you youth?”, and she replies: “I’ve missed out on a lot of parties, but that was my decision and I am very happy with it and I have experienced some marvellous things”. Self-assuredness. Look at her face when she answers. Her face sends us a wealth of information. That’s what people who are sure of themselves tend to transmit. They need no masks. What you see is what you get. And that gives you credibility. Now we’re getting back to the importance of fighting back against superficial appearances with authenticity. Remember that I was struck by seeing, during one of her first videoclips, how she could be seen with her teeth covered in dental braces. We are bombarded with programmes where the only thing that counts is the image, tremendously aggressive advertising showing ‘perfect’ bodies and gorgeous smiles and then I come across her ‘Skinny love’ video, the video which has been most shared, recorded on a low budget and where all that can be seen are close-ups of her teeth full of braces, even though that would surely scare off any image advisor for the type of programmes I mentioned before because they probably don’t portray the type of beauty which the television gurus want to promote. You see? The video communicates so many things! I remember saying to a friend: “What words! What chords! Even the braces fit well. Brilliant”

And then I end up talking about the rhythms. I believe that changes of rhythm communicate something too. They speak of evolving, of reinventing yourself, of ‘dancing’ (as Olaizola would say) with life. Changes in rhythm, in life are an unequivocal sign of activity, of creativity. One of the main characteristics of a creative mind is its changes of rhythm. Their impulsiveness. And in music, changes in rhythm. Changes of harmony. A joining of body, sound, instruments and melodies. Birdy leaves her piano and picks up her acoustic guitar. She tends to end her concerts with a piece called ‘Winter’. She begins in almost total silence, gently brushing her fingers against the guitar strings. Little by little she ups the intensity. Instruments join in, intentions join in, words join in and musicians join in. The lyrics wrap us up as one, with the almost psychedelic sounds with which she ends a song which speaks of honesty, that most necessary of ingredients for all healthy communication. Honesty.

But is there anything which communicates more than an unexpected smile? Last July, I was lucky enough to attend a Birdy concert. As fate would have it, I ended up being in the same hotel as the band in a small town in Germany called Schopfheim, straight after the concert I’d been to. To meet face to face with a singer you have just seen perform might not seem particularly special, but it really made my day! I think my face is communicating something, don’t you? 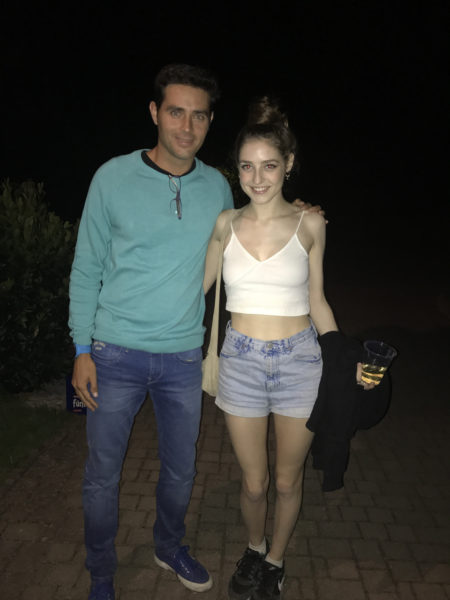